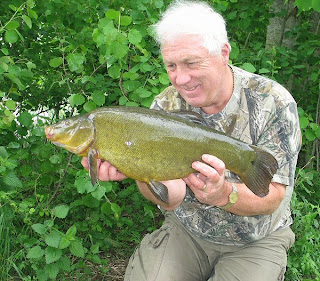 Once again, I was back on the tench trail, in the same swim as last week, in identical weather conditions. This time last year, I seemed to find the pit plagued with hurricane force winds whenever I chose to go. It was pleasant to fish a gentle ripple for a change.My approach to the fishing was identical to last week and on day one the action was manic from the first minute. I had a run only ten minutes after casting out at dawn. Annoyingly, I lost that fish but then had four tench in the next hour to 6lb 3oz, before missing another run.

There was then a bit of a break until mid morning, when I had a 3lb fish plus a sleek female of 6lb 8oz. I was then to lose what felt a really big tench in early afternoon, when this time I lost the battle with that tangle of branches to the left of the swim. No sooner had I re-tackled and recast than the bite alarm was screaming again; this time it was a very big carp that did me all ends up!

In mid afternoon, I managed a 4lb bream and a string of rudd to about 1lb. The rudd bites stopped abruptly about 4.0pm and that was the signal for two more big males to come calling. First into the net was another personal best of 8lb 7ozs, closely followed by another cracker of 7lb-11oz. What a super brace.

After that brilliant first day, I was up at the crack of dawn on the second, full of anticipation. But isn’t it typical of angling that day two was a complete blank!