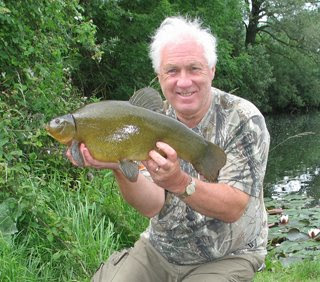 I’ve been meaning for some time to have a go for the fabulous tench of Carp Society water Horseshoe Lake near Lechlade in Gloucestershire and this year I finally did something about it. On my arrival I was greeted by Luke and Dave, who man the lodge at the venue, and I was immediately impressed with their professionalism and the terrific way the water is run. They were also very helpful with advice on where tench had been showing and I was soon ensconced in peg number 1. the most productive swim had apparently been Summer Point, the swim next closest to the lodge in Summer Bay, but it was temporarily closed, as were the swims round the shallows, as carp had started spawning.

Once again, I was using a size 12 Pallatrax hook on short Gamma fluorocarbon hooklinks, fished above the Kamasan feeder and held between rubber grip beads on rapid sink rig tubing. This rig ensures that no fish can possibly be tethered on a main line break. It is also easily adjustable to fish the hook bait right alongside the feeder or as far away as deemed necessary.

After finding a nice clear area about 30 yards out, with light Canadian pond weed around the fringes of the swim, I baited with six of my large cones of mixed hemp, casters, mini pellets and dead red maggots. Hook baits were two Enterprise buoyant red maggots with two real ones accompanying. By the time I was sorted out it was late morning, and the first two hours passed uneventfully as far as tench were concerned, although I was being regularly plagued by small rudd. Then, at 1.30pm, I had a real screamer and soon landed a superb tench of 7lb 8ozs. That fish opened the floodgates and in the next four hours tench came regularly. I wasn’t to get a really big fish but there were three more seven pounders and a few sixes. Nothing under six pounds was landed.

After a quiet night, I was expecting more tench action on the second day. But, typical of fishing, for some reason the swim had just died. Apart from more rudd, not a tench was tempted on day two.

It had a been a great first session on a fabulous water and I couldn’t wait to get back. That was planned for the following week.