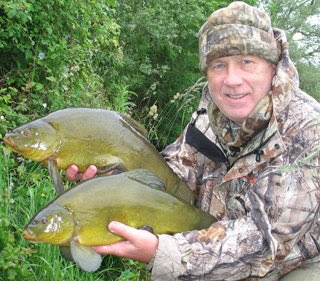 Not long after dawn, I was again setting up in swim number 1, for another crack at the tench. The general consensus had been that, the previous week, I had been a little unlucky not to have at least one big female of 8lb or over. In fact, the swim had produced a few doubles already, to over 11lbs. As my personal best is 11lb 11ozs, I was certainly in with a fighting chance of upping that with a little good luck.I approached the fishing in the same way as the week before, only this time I was using some of the new generation of rubber maggots that Chris Hormsby of Enterprise had sent me to try. He has imparted a very lifelike “wriggle” into them, so lifelike in fact that my wife was loath to touch them! I was also using for the first time my new TFG Specialist Bivvy, and was very impressed with it. The erection time stated of 20 seconds is certainly no lie, in fact it took longer to peg out than it did to erect. And pegging out was important in the very strong south west wind which, luckily, was directly behind me.

The session was the complete reverse of the first, the first day being completely blank apart from just one small rudd. Other anglers on the water were saying that the fishing had become very hard with very few fish landed for a few days. On the second morning, after an uninterrupted sleep, I still had over a pint of casters left and debated whether I should introduce any bait on account of the total lack of action in the previous 24 hours. In the end, I put them in, with half a pint to each rod. All or nothing, I said to myself.

At mid morning, another angler Leigh stopped for a chat and as we talked the wind really got up and a fine, squally rain started. I said to Leigh that hopefully the rain would bring the tench on and within seconds of the words leaving my lips, both rods were away. You wait hours for a bite, and then two come at once! With Leigh on hand to deal with one fish, both fish were played at the same time and landed in the same net, quite a bizarre occurrence. Leigh weighed them for me and declared two males of 7lb 6ozs and 6lb 8ozs. Quite an exciting way to end a quiet spell!

There were to be two more tench of 7lb 3oz and 6lb 6ozs before I eventually packed up in late evening, plus a few rudd. The one negative was a big rudd that got round my other line, dragging the second feeder into thick weed. Eventually, with everything solid, the hook pulled out of the fish and I was left cursing my luck.
I’m off to Acton carping next week ; I’ll let you know the outcome.