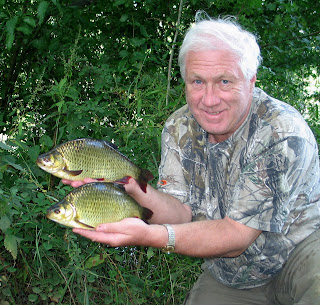 When you spend as much time as I do in a determined search for extra big fish, it can make a refreshing change occasionally to have a much less serious session. I had such a session last week. At the tench pit I took my 8lb males in the spring, I’d caught loads of rudd accidentally on tench tackle, so I decided to have a day after them with light float tackle.

When I arrived a little after dawn, I found that the water had changed a lot since May, in that there were great rafts of surface weed everywhere. Talking to the few carp lads who were fishing, it soon became evident that they were struggling, as the weed was really closing in. Nothing much had been caught for a while, the tench also having gone quiet. In the prevailing conditions, the one fish that would be worth pursuing in the upper layers would be rudd and I was bubbling with anticipation as I made a slow circuit of the pit looking for signs of surface activity.

Although there were lots of evidence of surface feeding carp, making me wonder why none of the carpers were offering floating baits, I saw no evidence of rudd until I arrived at a quiet corner where golden backs were breaking the surface. I’d found what I was looking for and was soon set up for a day’s “maggot spraying”, using my TFG Starving Whippet 13ft light float rod. At the business end was a Drennan large puddle chucker float, set three feet deep, with a hooklink of a ready tied Kamasan size 14 animal spade to 3lb mono, baited with a buoyant Enterprise red maggot and two real ones. That combination took around a minute to sink. By regularly casting and catapulting, I wanted to keep the bait slow sinking in the upper layers while freebies sank all around. Every thirty seconds or so throughout the day ten to fifteen maggots were catapulted around the float, to provide a constant rain of bait, and at the end of the day I’d got through half a gallon of reds.

After about ten minutes of casting and catapulting, the bites started in earnest and, as well as the fish I landed, I must have missed another twenty bites. I also had a ten second encounter with a big carp that made a complete mockery of my gear! I also had the mortification of losing the biggest rudd I hooked. It took the bait the instant the float hit the water, taking me a little off guard. There was a tremendous boil on the surface, a flash of red and gold, and then the fish was gone. It was certainly far bigger than anything I landed.

At the end of the day, though, I’d really enjoyed the change; I ought to do that kind of fishing more often. I had a total of 27 rudd, all over a pound in weight, with the best two 1lb 12oz and 1lb 13ozs, plus 13 nice roach to 1lb 6ozs. What was very interesting was the average size of the rudd. During the spring tenching, I’d had loads of rudd on my feeders, but the majority weighed only ounces. I also found out that the biggest verified rudd from the water, taken two seasons ago, is 3lb 11ozs. That one will do! However, I had no monsters and certainly no personal best, but what a brilliant day!