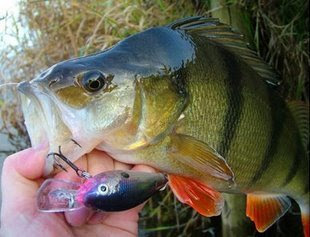 I have a little secret spot near my house that at certain times holds some absolutely cracking perch. Now looking at the stretch of water there’s no real cover or structure to speak of and I thought the river bottom was fairly even so what attracted these large perch here? Normally I fish this stretch in the autumn & winter months but now the river is down to its summer level is on went the chest fishing waders, a light plug rod and down off down the river to see if I could find some of the specimen strippy’s, wading into the river I found that the first few yards from the bank was a mix of silt and gravel but then the bottom changed to large rocks and boulders perfect hunting ground for the perch. In the colder months skipping a soft rubber lure over the bottom has done well but on this occasion I went for a floating Rapala plug which when cranked back will dive to about 5ft, reeling in till I feel it bumping across the bottom I then letting it rise back up a few feet watching the 15lb Tfgear Grunt braid that hangs from the rod tip for any movement. A slight twitch on the second cast and I strike into a solid feeling fish that puts up a great fight on the light 7ft spinning rod, the Grunt braid means I can feel every twist and turn the fish makes and within a short time a beautiful perch around the 2lb mark comes to hand, this seems to be the average size here. Over the next hour another 8 perch of similar size are landed great sport anywhere, then as the light starts to fade a really solid thump on the lure signals something larger, after a hard fight a superb stripy of 3lb 4oz is landed weighed and release great sport in just a couple of hours after work. Lure fishing is a great form of fishing and can be done with the minimum of gear.