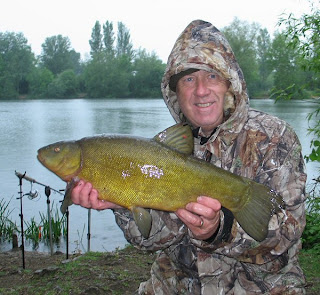 I was again tench fishing for two days and one night, this week being very hot and settled, apart from two hours of heavy rain on the second morning. I fished the adjacent swim to last week so that I had 7ft of water at 30 yards rather than 9ft. Once again, there was a pleasant gentle east wind.As far as the loose feed was concerned, I decided to eliminate the hemp, casters and pellets as an experiment, just baiting over each rod with two cones of dead red maggots to kick start the swims, and then casting the feeders every half hour or so.

The first tench came at midday on day one, and then at regular intervals until mid morning on day two, when the action stopped. I even caught two tench in darkness, a rare event for me. The average size of the fish initially was very disappointing, with the first six fish only up to about 4lbs. In fact, two were the smallest tench I’ve caught for years, barely a pound apiece. But at dusk, I did get into a bigger fish, with a cracking male of 7lb 5ozs coming to net. Two hours later, I had another of 7lb 3oz. Things were looking up; a brace of 7lb+ male tench was a first for me.

Just as it was getting light the following morning I had a screaming take which resulted in a lovely clean fish of 6lb 8oz, but the last fish of the session was the highlight. It was still pelting down when the reel handle was again a blur and I hooked into something that was obviously substantial. I had a real battle keeping it out of marginal branches to me left but eventually the fish was in the net. It was another cracking make fish, which soon proved to be a personal best of 8lb 2ozs. I was delighted with that and it made a fitting conclusion to the trip.