High temperatures and bright weather aren’t my favourite conditions to be carp fishing in, but I’d booked the Friday off work so Thursday night – with car packed – I was off to my syndicate water in Herefordshire. A stunning estate lake with some of the best-looking carp I have ever seen. Thursday night was quiet, just a good tench of 8lb 6oz and a new lake record (which was very pleasing but not exactly what I was after); the rest of the night drifted by quietly. Friday dawned calm and hot, and unfortunately some of the lake’s residents had started to spawn! Talking to the other members on the lake, we all thought that with these conditions it was going to be a struggle.

I walk around the lake and climb a few trees to see what’s happening, and find a group of carp feeding well away from the spawning fish;  clearly, a move was in order. My TF Gear Chill-out bivvy is soon moved to my new swim, rods cast out just as the late afternoon sun is starting to lose some of its bite. The lake is crystal clear and one of the most important bits of tackle I have for these conditions is the Tfgear Secret Trap fluorocarbon main line, which is almost invisible in the water. Having a  higher specific gravity than water it sinks really well, and on slack lines it is almost like having backleads on – which helps not to spook any of the fish in the area. Within 10 minutes of setting up in my new swim, one of my TFgear Glimmer bite alarms screams into life and the left hand Tsi rod cast close to the far tree line is in action. The fish comes in to about 30yds quite easily – making me think it was maybe one of the smaller fish in the lake – when suddenly it banks to the right and a slow solid run that’s impossible to stop takes 50-60yds of line off me in one go. The fish now kites even tighter to my right and my line is now going through the tree branches. The forgiving tip on the Tsi rod cushions the carp lunges, but with the line now precariously caught up there’s only one option – into the water I go! 10 to 15 minutes later and I’m slowly making some ground on the fish, it rolls out about 15yds and the action of my 3.5lb Tsi is great even at this close range. A couple more minutes and I slip my net under a very large common, but its not till I try to lift the net from the water when I realise I have the lake’s biggest resident; a stunning common that sends the scales round to settle on 40lb 8oz, a new lake record.

Pictures taken and congratulations from the other guys, and I settle back down with all rods recast. I retreat to my Comfort-zone fishing bed chair, looking back through the pictures on the camera to make sure I wasn’t dreaming, before drifting off to sleep. I have a few liners in the night so fish are still in the area, but a quiet night overall – not that I’m too bothered. Up early and Saturday is much the same, hot and sunny. I sit out watching the lake wake up, kettle on for an early morning brew when suddenly my middle rod is away. After a very hard fight I slip the net under another stunning common, the scales settle at 30lb 4oz a great result and another lake record falls – the largest brace ever taken on the lake, it really can’t get much better this!

The second Common, yet another lake record

I have to recast all 3 rods after playing the last fish; with all the commotion I was not expecting any more action, so I sit back down to finish boiling the kettle and make some breakfast. The fish have other ideas, and incredibly I’m in again after a good fight as a stunning 25lb mirror comes to the bank. What a session – after 5 years on the water, and many blanks in what seemed perfect conditions, a couple of days I thought would be tough tough turn out to be a record session. I slowly pack down and make my way home, and I think only another angler will know the feeling of satisfaction you get when it all comes together in a session of a lifetime. 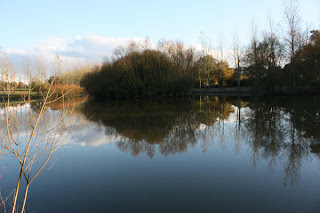 On my latest excursion to France, the trip all be it a brief one – just three days – ended up being a real eye opener! The trip came about after speaking to David Keep of Angling Lines, David recommended the nearby Windmill Lakes. The venue consists of two lakes set amongst 32 acres of beautiful French countryside, the first lake is around 3 acres and holds carp to 30lb, and the second lake is roughly 4 acres and holds carp to 40lb. When I eventually arrived at the lake I was pleased to be greeted by Dave and Sue Bainbridge who kindly offered a much needed mug of coffee. I had a good walk around the lake looking for any signs of moving fish, sun was shining down and the temperature was about 12 oc. I found the spot in which I was going to fish and started to get set up when the rain soon came over and the temperature started to drop. No stopping me though, so I persevered and was soon set up ready for action. 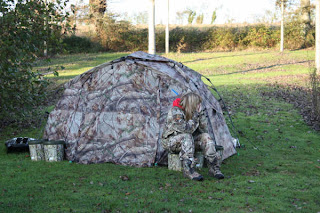 The temperature continued to plummet and it wasn’t long before snow started to fall. The sudden drop in temperature left me and my party of anglers feeling uncertain as to whether or not they would catch. It all came good on the third day though when something decided to sample one of my hookbaits. My Bobbins dropped to the snow then up it come again as the bite alarm screamed off as I hit in to my rod I knew it was a good size carp. 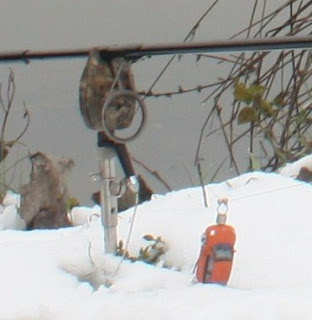 A good 10 minute battle resulted in a nice 35lb mirror resting in the bottom of my landing net. 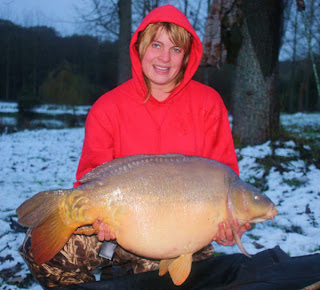 The mirror fell to a new bait on test, which was attached to an unusual take on the chod which I have been playing around with. Rather than using beads to hold the hooklink in place, I have been experiencing a lot of success by using two air-dried 10mm hookbaits threaded on to a TF leader and a 3 oz distance lead. Alongside this I presented a small PVA bags containing a dozen whole and broken freebies. I was the only one to catch during the trip and to do so during the snow make the experience even more special. 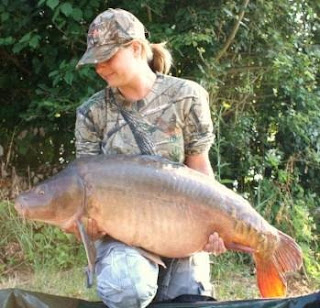 When I first arrived at the lake I took the usual walk around it to get my bearings and pick that all important swim to set up in. Within ten minutes of being there I had already witnessed a couple of fish crashing towards the middle of the lake. Then quickly decided to set up in a peg that would give me the opportunity to reach those fish. I chose some features to fish towards and carefully cast my fishing rods out armed with TF 36inch clear leaders and a 3oz clear lead hopping with this approach wouldn’t spook any fish. This wasn’t very productive and didn’t achieve any instant results so I sat and watched the water with all theories and methods going through my mind. A couple of hours later when the sun was really beginning to warm everything up I noticed a small group of what looked like 40+lb carp cruising around the bay next to me. 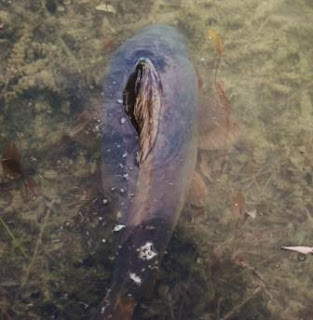 Not wanting to spook them off I quickly loaded the bait boat up with some broken up fruity boiles and placed two lines very close to them. I then watched intently waiting for that take, which by amazement came about an hour later. There was what can only be described as an awesome fight and a 40lb 8oz mirror was in the net. This really put my hopes up for what promised to be an excellent week to come. The following night a 44lb 12oz mirror was landed from the same spot. Things became very slow going from then on and I soon realised this was no runs water but a lake you had to work very hard at in order to catch. I decided to take the rowing boat out and really get to grips with what was happening. It soon became obvious that the fish didn’t stay in one particular area but seemed to move every couple of days so I decided that my best option was to move with them. 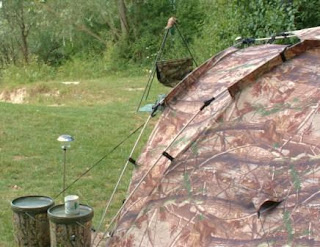 All Set up and ready to go
I then set up in a peg round the other side of the lake with a bay in front and to the side of me and the island within reach as well. I could cover a lot of water from there really be on top of the fish. Luckily the water was crystal clear and it seemed far too easy to locate ideal clear spots in amongst the weed beds. I marked up some different areas and decided to feed small amounts of bait to them on a fairly regular basis. This helped land a couple more fish a day apart from each other so I decided to stick with it for the rest of the week being happy with the fish that had been caught. 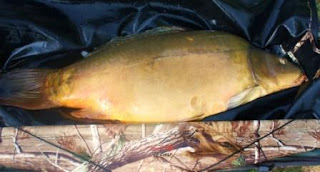 40lb Carp in the Weigh Sling
Towards the end of the week there was the most amazing storm come over, it felt as though a steam train had just come straight through my peg. There was thunder and lightning all around and all I could do was keep my fingers crossed that the fish switched on due to it. It was like all my hopes and dreams came true and during the following 24 hours I landed some amazing fish ranging from 31lb 4oz up to 42lb.All I can say is “What a week”